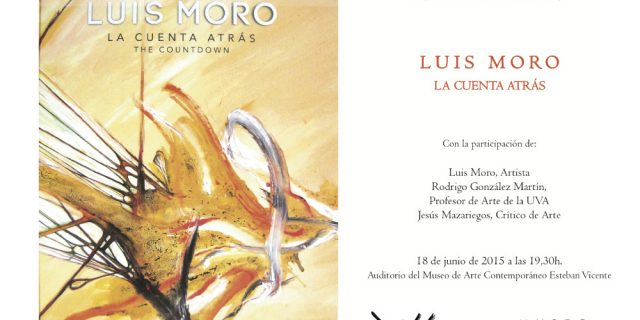 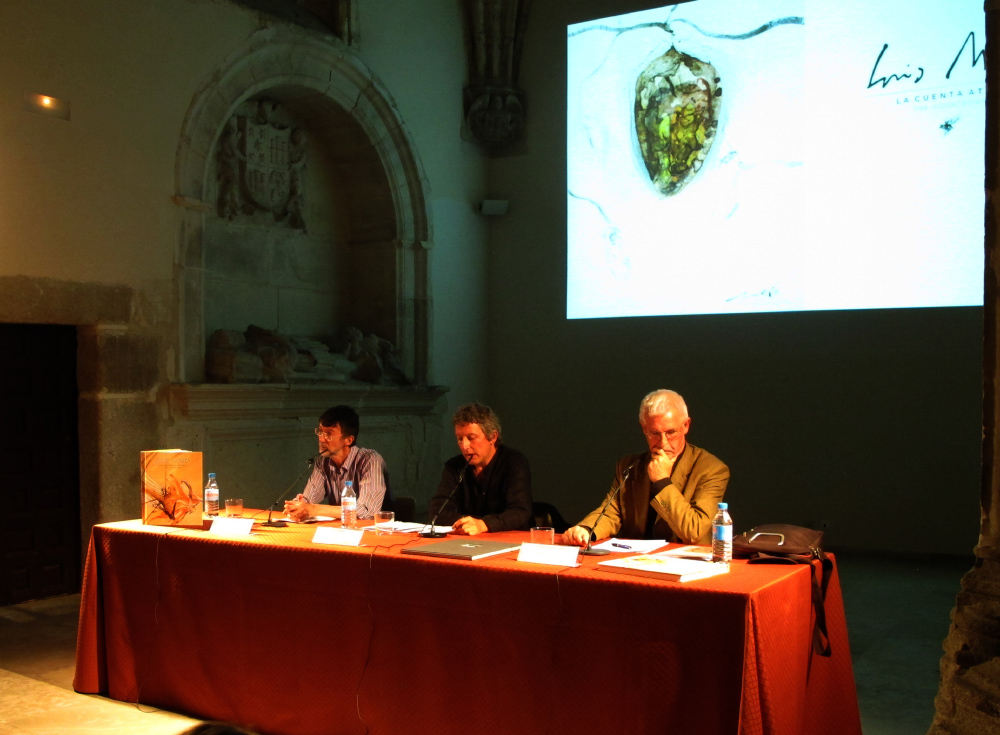 Excerpts from the book

“… Luis Moro statement with the title of the series and I have taken to this paper: we are in the countdown, have placed such things that we eliminate animals, tree species, entire ecosystems. It seems that humans are a damn flood, a punishment for the planet and become real zoo ‘Noah’s Arks’. However extensive series developed by the painter has many shades to address, there is a shrill pictorial pamphlet in favor of ecology, but combines strategies in which the same is the poetry of the architecture of an insect, and fine solution straight geometries and transparencies Alados or criticism that underlies many of the pictures of riders who ride on horses blindfolded, blind in his career, like humans run in that delirious and eroded track it’s ‘Countdown’. This accounting that brings us into the abyss, is the reason that several of the pictures, presented figures or letters in the image, reminding us that time flows and our industrial career totally detached from the complex biological tissue of the world is ending with our own habitat although we believe that only the animals are disappearing … Fernando Galvez

“… Luis Moro in an inherited work of other travelers from the old continent, come to Mexico to explore the biodiversity … … This form of transcription of nature, given its inverse proportions (from small to large and vice versa) allows us to look to a fantastic world that coexists on the epidermis of the earth, through a loose-leaf animalario not shown any description, but generates through its own speech stunning visual narratives … “Rafael Perez y Perez

“… The Spanish painter Luis Moro continues polishing his fascinating aesthetic world ‘underwater’: fish, squid, sea horses; and the number of insects, aptly titled ‘elementary havens’: bees, flies, butterflies, whose poetry is a rich reflection of internal tensions, with room for refinements sensual and mystical hallucinations … “, as found in Moro earth, nature and the sea that tradition, realism and creative freedom, to set an exquisite work. And why not, Moro creates a ‘fantastic’ world with his work; an unpublished imaginary beasts … “Miguel Angel Muñoz

“The first painters of history were painters of animals and at the same time, had some witches or wizards keepers of secrets. Luis Moro is also a animalier painter and his eyes betray that is aware of some hidden knowledge. Luis Moro painted animals as a necessity. It is one of those cases of visceral, genetic painters paint in the veins, which need painting as breathing. He began painting mammals fragmented and almost flayed musculature anatomy, fish between life and death, suffering and silent beings, sometimes pleading, transcript of the entire animal world, including humanity … “Jesus Mazariegos

Biography of some of the authors

Fernando Gálvez de Aguinaga
Writer and art critic, was Director of the Institute of Graphic of Oaxaca and the Museum of Arts Cobweb. It is a cultural promoter and collaborator of La Jornada and Letras Libres. He has written about Francisco Toledo, Alejandro Santiago, Rembrandt, Goya, and Gabriel Clemente Orozco, among others.

Rafael Perez y Perez
Deputy director of the Art Museum of the Ministry of Finance and Public Credit (SHCP). Curator and art critic, has written articles and organized numerous exhibitions around Mexico, with international artists such as R. Von Gunten, Phil Kelly, J. Marin and Rodolfo Nieto, among others.

Miguel Angel Muñoz
Doctor in Art History at UNAM and columnist for the newspaper El Financiero, La Jornada Semanal, the Reason and Chronicle. He has written and curated exhibitions on Eduardo Chillida, Esteban Vicente, Tapies, Canogar, Cuevas, Matta, Francesc Torres, Francesco Clemente and L. Burgueois, among others. Associate member of the Seminary of Mexican Culture.

Jesus Mazariegos
Doctor in History of Art from the Complutense University of Madrid, Professor of Institute, Professor of the UNED and Kiis (Consortium of American Universities). He is the author of a monograph on Rafael Baixeras. It is an art critic in the Segovia edition of the newspaper “El Norte de Castilla”. As an art critic he has participated in the First and Second Conference of the MUSAC of León, as well as in the lecture series “Perspectives criticisms of MUSAC Collection”.