Luis Moro connects his art to the word of Gamoneda 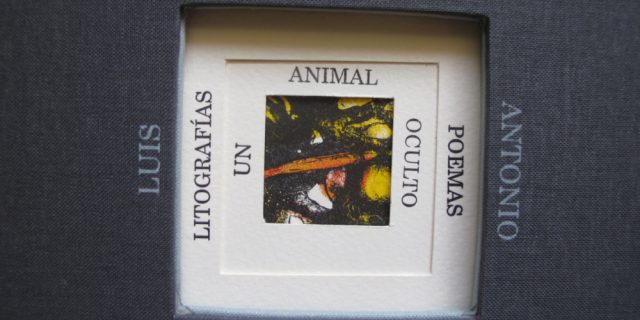 Segovia artist Luis Moro presented yesterday at the headquarters of the Spanish Association of Painters and Sculptors (AEPE) one of its most unique and ambitious in collaboration with writer and Cervantes Prize Antonio Gamoneda projects. Titled “Animal Oculto”, Moro and Gamoneda had a mask three lithographs and three original poems, co-edited by the gallery owner and editor Rodrigo Juarranz, which were presented in the afternoon yesterday by the presidents of AEPE, Jose Gabriel Astudillo and the Spanish Association of Art Critics (AECA), Tomas Paredes Romero.
For the world premiere of this work, the authors have chosen Madrid as an entity that was founded 105 years now the work of great artists like Chicharro, Sorolla, Blay or Cecilio Pla ago to follow a tradition of the Spanish Association Painters and Sculptors is already a veteran, and that its corporate acts always been done this type of introductory work of the best artists.

The collaboration between Antonio Gamoneda and Luis Moro is the first painter to Segovia, but the poet has already done before with the likes of Alvaro Delgado, Antoni Tapies, Muzzle Amaya and Juan Carlos Mestre and others.
The work of Luis Moro, deeply rooted in Hispanic culture, has a broad international presence. A thirty-four years and has been more than thirty solo exhibitions, of which about half was earned outside Spain. Throughout its already long career he has received numerous awards, among which include the National Awards for Painting and Engraving, Youth Arts Competition between 1985 and 1989, International Painting Prize Benidorm 1987 Liceo Spanish Prix de Paris 1991 Casa de Velázquez Scholarship 2002 (Madrid-France), Grant Conaculta, Artresd, Mexico 2012, SMART Grant, CAM, San Antonio, USA, 2013 …

Antonio Gamoneda (Oviedo, 1931) is Doctor Honoris Causa by the University of León, winner of the National Literature Prize in 1988, Cervantes, Don Quixote Award in 2009, Gold Medal of the city of Pau, the Principality Silver Medal Award in 2006 Asturias, “Lethe” Lion Gold Medal and Gold Medal of the Circulo de Bellas Artes. Award Since he published his first book in 1960, and has published 17 books of poems, test 28, 4 stories and being countless translations and the amount of other work to be known.
Gamoneda defined poetry in one of his essays: “It’s the art of memory in the prospect of death.” Its critical reception has always been favorable since the poet began to publish “Three are the props, insistently repeated by the poet in [their] writings on the height of his poetic thought rises: – The self-referential nature of the -intrarreferente poetic word, too- he says, the significance and the reality do not cross to an outer reference. The trigger for musical nature of poetic language (‘The poetic thought is a thought that sings’). The fact that only possible that poetic language between intelligibility on condition of sensitive images.